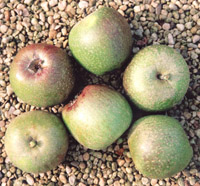 Also called Beachamwell Seedling and, originally, Motteux’s Seedling. Mr Motteux of Beachamwell, in Norfolk, raised it, probably in the middle of the 18th century, according to Bunyard. The fruit is small with a dark green skin, ripening to pale yellow, tinged red on the sunny side, with occasional russet. The yellow flesh is juicy and Hogg calls it “a rich and deliciously flavoured dessert apple, of the highest excellence”. Bunyard, in 1920, reported that it was almost out of cultivation, though old trees can still be found locally. Ripe by November and lasting to April, it is a hardy, good bearer. It can be rather variable in appearance and the amount of russet. Pollination Group 4